Ravindra Jadeja took four wickets as India crushed England by 95 runs to complete a 5-0 whitewash their fifth ODI at the Eden Gardens in Kolkata. 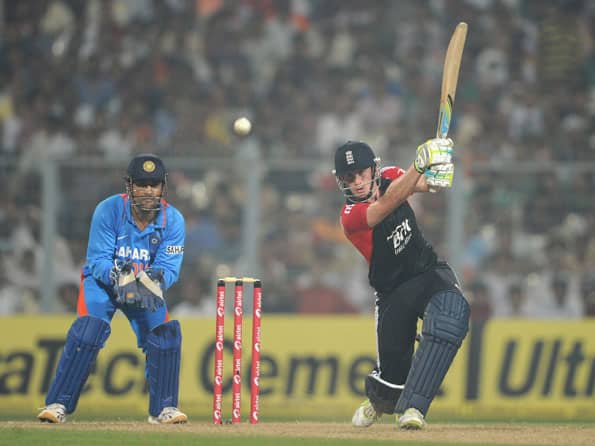 Ravindra Jadeja took four wickets as India crushed England by 95 runs to complete a 5-0 whitewash their fifth ODI at the Eden Gardens in Kolkata.

England, started off well with a 129-run stand for the first wicket provided by Alastair Cook and Craig Kieswetter, lost their way after the fall of first wicket and were dismissed for 176 runs.

Varun Aaron provided India the much-needed first breakthrough when he dismissed Cook for 60 in his second over.

Cook hit eight boundaries for his innings of 60, which came from 61 balls.

Kieswetter attacked the Indian bowlers right from the start and raced to 63 off 64 balls with the help of nine boundaries and a six. His quickfire innings came to an end when he was trapped in front of the wickets off Ravindra Jadeja.

Jadeja then struck once again to dismiss Ian Bell for one, to help India gain some momentum, and a few balls later, he dismissed the bigwig Jonathan Trott for five.

Earlier, Mahendra Singh Dhoni hit a 69-ball 75 to help India set a 272-run target for England to win in their fifth and final One-Day International at the Eden Gardens in Kolkata on Tuesday.

Dhoni clobbered four sixes and three boundaries for his 75 not out, which not only bailed India out from trouble, but helped them set a big target on a slow pitch.

Suresh Raina, who was runout for 38 runs off 46 balls, hit five boundaries during his stay.

India kept losing wickets at regular intervals, which denied them a chance to set a big target against England on a slow wicket at the Eden Gardens.

Earlier, Steve Finn led England s fightback bagging two wickets in an over after India made a confident start in their final One-Day International match.

Gautam Gambhir, who was promoted up in the order to open the innings, hit four boundaries for his 38 which came from 46 balls was the first to be dismissed by Finn.

The right-arm pacer then struck after five deliveries in the same over, to get rid of the in-form Virat Kohli, who offered no shot on a delivery coming in to the stumps, for a duck.

Tim Bresnan then added more to India s woes when he had Ajinkya Rahane caught behind by wicketkeeper Craig Kieswetter for 42 off 61 balls.