Australia's batsman dominated on Day One of the first Test.

Australia will face India on Day Two of the first Test at Adelaide. Indian bowlers had a tough day on Day One, as they were hammered by some quality batting by David Warner, Michael Clarke and Steven Smith. Warner went on to make a century, while Clarke was retired hurt on 60. Smith will look to lead Australia to a healthy first innings total.

The day began with 63 claps in honour of Hughes and the national anthems. Warner was in a hurry when play began. He smashed his first ball for a four through cover and had hit three by the time he had faced his first over. The Indian pacers began by attacking the Aussie batsmen from round the wicket. It was a move that backfired as Warner milked runs through the off-side. In the first four overs, Warner had raced to 35 of 17 balls.

It was the Warner show all along as he raced into the 70s in the morning session. Ishant Sharma was India’s best bowler on the day as he was economical and bowled in the right areas. Early in his spell, he was rewarded with the wicket of Chris Rogers. Varun Aaron and Mohammed Shami were expensive through the day. However, Aaron made up for it with the wickets of Shane Watson and Mitchell March. 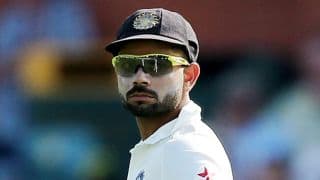 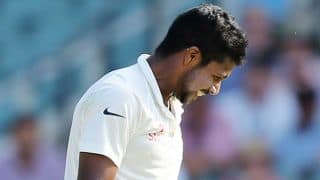