The Australian batsmen dominated the proceedings of the second day.

Australia and India face off on the third day of the first Test at Adelaide on Thursday. Australia finished on a score of 517 for seven at the end of the second day, with Steven Smith and Mitchell Johnson batting on scores of 162 and zero respectively. David Warner and skipper Michael Clarke had earlier slammed their 10th and 28th Test centuries. The Indian bowling department was not particularly impressive, with Mohammed Shami, Varun Aaron and debutant Karn Sharma taking two wickets apiece, while conceding over 100 runs at the same time.

The Indian pace bowlers were far from impressive as they bowled a poor line and length and seldom troubled the Australians. Clarke, despite the back injury, managed to play his shots effortlessly, presented too often by loose deliveries by a rather listless attack.

Smith, on the other hand, continued his good form to clinch his fifth Test century and was undefeated on a career-best 162 when play was called off early due to fading light and rain interruptions. In all, there were three rain interruptions during the day on which merely 30 overs could be bowled.

Emotions were still running high in the aftermath of Phillip Hughes’ death and both Clarke and Smith looked heaven-wards after completing their hundreds to pay tributes to the late batsman, who was named the honourary 13th man before the match. 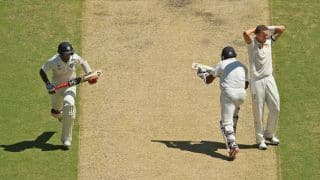 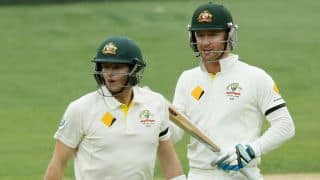