Australia and India clash on the fourth day of the first Test at the Adelaide Oval on Friday. India finished on a score of 369 for five at stumps on Day Three, with Indian skipper Virat Kohli top-scoring for his side with a 184-ball knock of 115. Cheteshwar Pujara, Ajinkya Rahane and Murali Vijay too chipped in with the bat, scoring 73, 62 and 53 respectively. Among the Australian bowlers, Mitchell Johnson and Nathan Lyon took two wickets apiece while conceding 90 and 103 runs respectively. Ryan Harris was the most economical bowlers among the lot, conceding 49 runs from 17 overs at 2.88, dismissing Shikhar Dhawan in the process.

Rohit Sharma joined in late in the day and played some good shots. Lyon kept testing the Indian batsmen through the day, but his wicket of Rahane would stand out as the ball kicked off a length and took his gloves. Rohit too had his troubles but managed to survive through to stumps. Kohli however, fell for 115 as he tried to pull Johnson and was caught in the deep. Wriddhiman Saha battled a rough spell from Johnson at the end to help India finish without further damage. 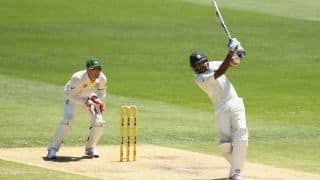