Vijay departed soon as he was removed by Shane Watson after scoring 68 runs.

India reached a total of 462 for eight after at the end of Day Three’s play against Australia after Ajinkya Rahane and Virat Kohli reached individual centuries. Kohli and Rahane were involved in 262-run partnership for the fourth wicket which saved India from fall after Murali Vijay and Cheteshwar Pujara were dismissed early on Day Three. Pujara was the first batsmen to depart after he edged a rising delivery from Ryan Harris to Brad Haddin behind the stumps.

Vijay departed soon as he was removed by Shane Watson after scoring 68 runs. Vijay was yet again dismissed short of his Test century. After losing two quick wickets the India team recovered following the partnership between Kohli and Rahane. They both played some fluent strokes and added quick runs. Rahane was the more aggressive of the two as kept adding quick runs.

Rahane was finally dismissed on 147 by Nathan Lyon. Virat Kohli was also removed by Mitchell Johnson in the last over of the third day’s play. Johnson bowled a full delivery quite wide on of the off stump and Kohli who went to chase it was caught behind by Haddin. Debutant, KL Rahul couldn’t perform well in his opening innings for India. He was sent packing Lyon only when he was batting for three.

The Day Four of play will be very crucial for both teams. India still trail by 68 runs and would want to get closer to the Australian total. While on the other hand, Australia would want to bowl India out as quickly as they can on Day Four so that can come back and score quick runs. India need to come up with a disciplined bowling attack this time again. Ishant Sharma who has failed to get wickets will need to perform better this time. 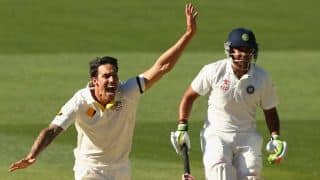