Catch the Live Scorecard of Day 2 of the first Test here.

After hanging around on 99 for a long time Murali Vijay completed his ton — his first in overseas conditions. After racing up to 41 at over a strike rate of 100, Vijay faced a total of 214 balls for his ton which showed the value of temperament in the painstaking effort. Once he crossed hundred, the cover drives looked more graceful and the timing was as sweet as one would expect from a centurion. It was one of the better innings from Vijay where the bowlers have not been able to dominate him.

Alastair Cook’s captaincy though still looked a touch shaky. While the smart field placements paid off, his choice of using Ben Stokes as much as his regular pacers still looked out of place. And the absence of a specialist spinner is certainly hurting England. But credit to the pacers for adapting to the conditions. There was not much swing or seam movement off the deck, but the change of pace and angle of deliveries were key to their success today. 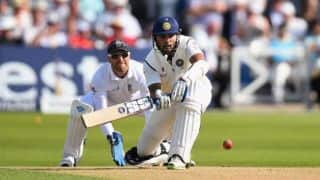