India will be looking to play safely in the first session of the fifth day.

India will resume at 167 for three in their second innings, with a lead of 128 runs on the fifth day of the opening Test against England at Nottingham. Virat Kohli and Ajinka Rahane will resume the proceedings for India.  Catch the Live Scorecard of the third day’s play between India and England here.

By the end of the fourth day, the Test match was all but pronounced dead and buried under the necropolis of a surface. Only four wickets had fallen through the day, none in the morning session. A result looked possible only if there is a miraculous collapse, but thus far all the miracles in the match had been performed by bowlers gripping their bats at No 11.

And then all of a sudden two wickets off consecutive balls breathed much needed life into the tale. With the Indian tail long, winding and inexperienced, there can well be another twist along the line. The zestful life of the lower order may have been exhausted by the immaculate last wicket acts on the second afternoon, one can’t expect similar shows every day.

Catch the Live Blog of the Third day’s play here 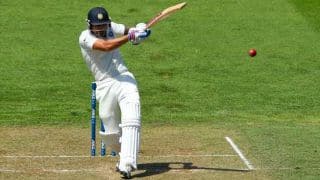