India have a daunting task ahead of them on Day 3 as they trail England by 544 runs.

India and England clash on the third day of the third Test at Southampton. India finished at 25 for one at stumps on Day 2 after England declared their innings after scoring a massive 569 for the loss of seven wickets. The English innings included centuries from Ian Bell (167) and Gary Ballance (156), as well as half-centuries from skipper Alastair Cook (95) and Jos Buttler (85). The pick among the India bowlers was Bhuvneshwar Kumar, who picked three wickets for 101 runs.

Shikhar Dhawan‘s poor run with the bat in this tour continued as he managed to score only six runs before he was caught by Cook off a full-pitched outswinger by James Anderson. The visitors now have a daunting task ahead of them on the third day if they are to win this Test and take a 2-0 lead in the 5-match series. 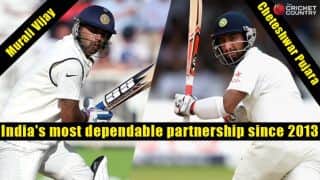