Day 1 of the Boxing Day Test between New Zealand and Sri Lanka at the newly accredited Hagley Oval was sold out.

Day 1 of the Boxing Day Test between New Zealand and Sri Lanka at the newly accredited Hagley Oval was sold out, a rare phenomenon in New Zealand. But the crowd would’ve gone home with more than heir money’s worth after witnessing a a McCullum special. Skipper Brendon McCullum treated the crowd to some extravagant strokeplay en route his 195 off 134 balls.

The Sri Lankan bowlers started off well picking the wickets of Tom Latham and Hamish Rutherford early, but once McCullum along with a steady Kane Williamson at the other end were at the middle they lost their steam. Williamson scored a calm and composed 54, providing skipper a platform to explode in his usual style. Lower in the batting order James Neesham whacked an amazing 85 off 80 balls. New Zealand finished on a commanding 429/7. Sri Lanka will look to make amends on Day 2 by quickly folding up the New Zealand innings and then batting well against a strong Kiwi bowling attack. 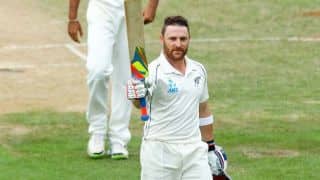