Sri Lanka were skittled out for 138 in their first innings.

New Zealand and Sri Lanka face off for Day 3 of the first Test of the three-Test match series at Christchurch. New Zealand who finished day 1 at at 429/7 were quickly folded up for 441, thanks to wickets by skipper Angelo Mathews and Suranga Lakmal. Mathews got the wicket of Tim Southee who didn’t put any runs on the board and Lakmal bagged the wickets off Trent Boult and Neil Wagner in the same over. But what seemed like a good start to the day for Sri Lanka took a disastrous turn for them as they came out to bat.

Trent Boult and Tim Southee who are reputedly great exponents of the new ball swing bowling ripped through Sri Lanka’s top order. Boult lapped up the wickets of Dimuth Karunaratne, Kaushal Silva and Kumar Sangakkara — the top three in the batting line up and Tim Southee at the other end picked the wickets of Lahiru Thirimanne and Niroshan Dickwella to leave the visitors rattled.

Neil Wagner and James Neesham than came to the party, with Wagner taking three wickets and Neesham taking two. Only Angelo Mathews, with a 50 displayed any semblance of a fight as the visitors innings came to an end at 138 trailing by 303. McCullum without hesitation enforced the follow-on.

One would expect another poor display from the visitors in their second innings still reeling from the shock off the first innings but the visiting openers seemed to adapt well. The openers Karunaratne and Silva who went cheaply in the first innings showed great resolve in the second innings putting on an unbeaten partnership of 84 before stumps were called. Karunaratne contributed with a 49 to the partnership while Silva was batting on 33.

New Zealand who are still undoubtedly in a much stronger position in the match will look to break the partnership early on Day 3 and then try and penetrate through the rest of the batting line up. Sri Lanka on the other hand will want to put as many runs on the board as possible to try and take away advantage from the hosts. 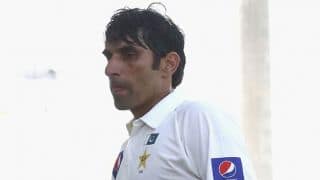