Pakistan currently lead the series 1-0 after a three wicket victory at the Dubai.

Pakistan take on New Zealand in the second of the five-match ODI series at the Sharjah Cricket Association Stadium in Sharjah, UAE on Friday. Pakistan currently lead the series 1-0 after a three wicket victory at the Dubai Sports Complex in Dubai, UAE.

The Kiwis shouldn’t be too disheartened by the result as they remained competitive throughout the game. They were in fact, in the position of ascendency for a major chunk of the 100 overs.  Despite fielding a depleted bowling attack, they put in a spirited effort while defending a modest 246.

Pakistan’s top order continues to misfire, especially in run-chase situations. Sarfraz Ahmed has been their most consistent batsman, due to which it is inexplicable that a man of his prodigious talent and rich vein of form should be batting down at number seven.

With the action shifting to Sharjah for the second ODI though, batsmen from both sides should be queuing for a sumptuous outing in the middle. The relatively smaller outfield coupled with a pitch conducive to stroke play, we may finally witness a high scoring limited overs contest between Pakistan and New Zealand. 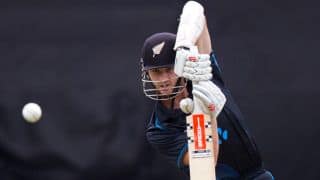 India vs Australia 2014-15: Ajinkya Rahane believes patience will be key on final day