Catch the Live Scorecard of Day three of the thid Test betweem Sri Lanka and Pakistan.

Pakistan reached 244 for the loss of six wickets after 70 overs at the end of play on the second day of the final Test against Sri Lanka at Sinhalese Sports Club at Colombo. Sarfraz Ahmed and Abdur Rehman were at the crease batting at 66 and and 1 respectively. Rangana Herathemerged the pick of the bowlers once again with figures of five for 98.  Catch the Live Scorecard of the 2nd Test between Sri Lanka and Pakistan at Colombo (SSC) here

The start of the Pakistani innings saw Mahela Jayawardene get a Guard-of-Honour at the venue which has been a happy hunting ground for him, having scored 11 out of 34 Test centuries. Pakistan got off to a good start as they started attacking from the word go. Herath was the first to strike for the Lankans. The ball kept crossing the boundary line regularly and Angelo Mathews was left looking at further options in spite of introducing star spinner Herath in the fifth over itself. 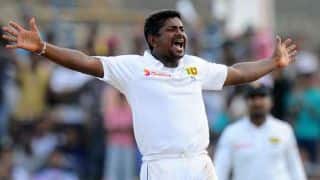 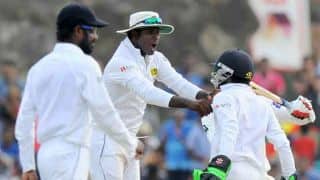