Australia face off against South Africa in the third and final T20I at the Newlands Stadium in Cape Town on Wednesday.

Visitors Australia face off against hosts South Africa in the third and final T20I at the Newlands Stadium in Cape Town on Wednesday, as the live cricket streaming of the match is available on tensports.com, while the live telecast of the match is available on Ten Cricket and Ten HD. Australia, who have been on the reciving end in the T20I series against India at home, after losing the series 0-3, would look for redemption, as they aim for a series win here against South Africa. While the hosts too would be on the mission to win this tie and the series as well, as they target a strong performance in the ICC World T20 2016 in India from next week. FULL CRICKET SCORECARD: South Africa vs Australia, 3rd T20I at Cape Town

Australia face South Africa in an ultimate series decider of their three-match Twenty20 International (T20I) series at Cape Town on Wednesday. After the last-ball finish that went Australia’s way in the second T20I, the visitors are surely charged up, keeping the loss in the opening match at Durban off their mind. South Africa posted a mammoth total of 204 in the first innings with Faf du Plessis leading the charge with 79 off 41. He was supported by the likes of Quinton de Kock and David Miller who scored 44 and 33 respectively. FULL CRICKET UPDATES: South Africa vs Australia, 3rd T20I at Cape Town

Despite Dale Steyn and Kasigo Rabada reducing the Australia to 32 for 3, Australia found their match-winners once again in David Warner and Glenn Maxwell. With the both the teams high spirited, charged up and desperate to enter the upcoming ICC World T20 2016 with a win, the series decider in Cape Town will be nothing but a thriller. 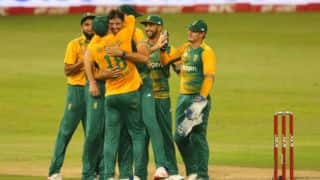