GL take on visitors and under-performing KXIP, in Match 28 of the ongoing Indian Premier League (IPL) 2016 at Rajkot.

Hosts Gujarat Lions (GL) take on visitors and under-performing Kings XI Punjab (KXIP), in Match 28 of the ongoing Indian Premier League (IPL) 2016 at the Saurashtra Cricket Stadium in Rajkot on Sunday, as the live cricket streaming of the game is available online on starsports.com and Hotstar, while the live telecast of the match is available on Sony SIX HD, Sony ESPN, Sony ESPN HD, along with Tamil, Telugu, and Bengali on Sony SIX, while the Hindi commentary is available on SET MAX. GJ are on topof the table will hope to continue their winnings ways, while KXIP will want a change of luck after changing their skipper.  FULL CRICKET SCORECARD: Gujarat Lions vs Kings XI Punjab, IPL 2016 at Rajkot

The two teams will lock horns for a second time in the tournament. In the first game played at Mohali, Lions had won by 5 wickets. Punjab have only two points from six games, their only win coming against Rising Pune Supergiants. Their big names such as Glenn Maxwell and skipper David Miller have failed miserably so far. Kings XI Punjab (KXIP) opener Murali Vijay replaced David Miller as the skipper of the side in the ongoing Indian Premier League (IPL) 2016. The confirmation came, after it was reported that Miller was mulling to step down as the skipper of the side, following his sides recent poor performance in the league so far, as they currently sit in the bottom of the table. 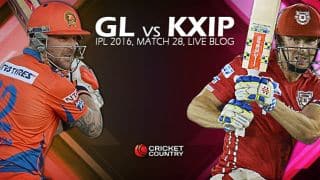