Australia finished on a score of 517 for seven at the end of the second day of play.

Australia and India meet on the third day of the opening game of the four-Test series at the Adelaide Oval on Thursday. The hosts, resuming from a score of 354 for six at the start of the second day, piled further misery on the Indians. Australia reached a score of 517 for the loss of seven wickets at the end of Day Two. Steven Smith was unbeaten on a score of 162 from 231 balls, top-scoring for his side in the process. David Warner and skipper Michael Clarke had earleir slammed centuries before getting dismissed on scores of 145 and 128 respectively.

Intermittent rain plagued the day with the Australian duo ruthlessly dominating a listless Indian bowling, which conceded 163 runs in 30.4 overs.

A half-fit Clarke and Smith shared 163-run partnership for the seventh wicket and completely dominated with some scintillating strokeplay till the skipper, after completing his 28th century, lost his wicket when his sweep off a debutant Karn Sharma delivery went straight into the hands of Cheteshwar Pujara at square leg.

The 25-year-old right-handed batsman Steven Smith once again showed mettle with a gritty knock. He batted with aplomb as his captain battled pain and initially struggled with body movement due to back spasm which had forced him to retire hurt Tuesday at an individual score of 60.

Early on, Smith kept the scoreboard ticking by peppering the boundary. His knock not only pressurised the Virat Kohli-led Indians but also took pressure off Clarke as he took time to settle down.

Catch the live coverage of the first Test between Australia and India on starsports.com, and the live telecast of the match on Star Sports 1, Star Sports 3 and Star Sports HD 1. 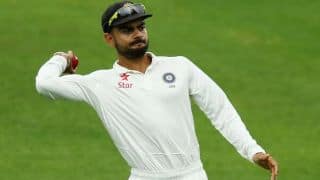 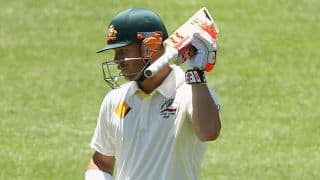