Catch the live streaming of the match here.

Australia face off against India in the second of the four-match Test series at Brisbane on Tuesday as Day 2 action kicks off at The Gabba. Earlier India put a commanding performance on Day 1 as they finished on 311 for the loss of four.

Earlier, India won the toss and elected to bat first as both sides made some changes to the teams that played the first Test at Adelaide. Mitchell Marsh captured his maiden Test wicket when he got Shikhar Dhawan to edge behind to Brad Haddin for 24. Murali Vijay and Shikhar Dhawan put on India’s first overseas half-century opening stand since the first Test against England in 2011. Vijay looked assured in the middle, and while Dhawan seemed shaky early on he managed to stick it out on one of Australia’s paciest wickets.

Catch the Live blog of the match here 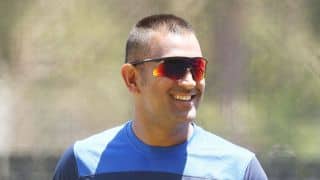