Catch Free Live Streaming of the 1st Test between India vs England here.

India take on England in the first Test match of their five-match series starting on Wednesday at Nottingham, Trent Bridge. India will be aiming for a positive start as they were blanked 4-0 the last time they had toured England in 2011. England are on a rebuilding phase and they would be keen to put behind the loss to Sri Lanka and move ahead.

According to PTI, it is a great opportunity for a young visiting side as they play five back-to-back Tests in this hectic 42-day series. The next four Tests will be played at London (Lord s), Southampton, Manchester and London again (The Oval). Under MS Dhoni, India s last overseas Test win had come against the West Indies at Kingston in June 2011. 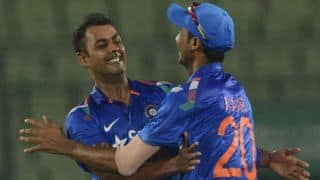