Follow live streaming of Day Two of the first Test between India and England.

India are 259 for four at the end of Day One of the first Test against England at Nottingham. Murali Vijay’s innings of 122 not out helped India start very well and then MS Dhoni came to score an unbeaten half-century. This is a very good start for India and it bodes well for them ahead of all the Tests to come.

According to Arunabha Sengupta’s report, “Two shock wickets after lunch and a suspect Indian lower middle order has kept England in the game, but apart from a tense post-lunch session, the bat has clearly dominated the ball. The weather is supposed to remain fine through the early part of the second day and India will be keen to have another good day under the sun.” 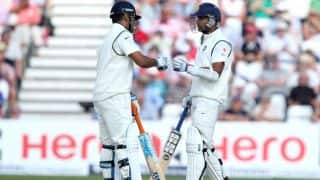