Catch live streaming of the India vs England 2nd Test at Lord's here.

India start the Day Four of the second Test against England at Lord’s 145 runs ahead, but with just six wickets remaining. The match is in India’s hands at the moment, but an early wicket will change all that. Murali Vijay and MS Dhoni will need to double the score to feel safe, but England will have their tail up after an impressive showing in the final session on Day Three. Catch Live Streaming of the second Test between India and England here

Stuart Broad and Liam Plunkett will be itching to have a go at the Indian lower order after the two quick bowlers ripped apart the Indian top order late on the third day. Virat Kohli was out for a golden duck, and Ajinkya Rahane got a bad decision as India lost three wickets for just five runs before Vijay and Dhoni took India to relative safety. Catch the Live Blog of the match here

Alastair Cook will be hoping his bowlers can get rid of the last recognised batting pair early, but with India’s long tail in Stuart Binny, Ravindra Jadeja, and Bhuvneshwar Kumar, he will not rest easy till the tenth wicket has fallen. The match is evenly poised, and if India can add another 120-odd runs, they will feel in control. Catch the Live Scorecard of the match here 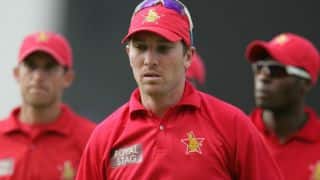