Catch the live streaming of the MCC vs ROW match here.

The Marylebone Cricket Club (MCC) take on the Rest of the World XI on Saturday at Lord’s Cricket Ground in the bicentenary match. Catch the live blog of the match here.

Leading the MCC is the Indian batting legend Sachin Tendulkar and the RoW will be led by Australian spin legend Shane Warne. In what promises to be a match between two legends of the game, both the teams are filled with star cricketers from all over the world.

Rest of the World captain Shane Warne won the toss and elected to bat against MCC in the Lord’s bicentenary match on Saturday.

You can watch the official live streaming of the ODI match at Starsports.com.

The one-day fixture saw two star-studded sides featuring many of the game’s recently retired greats and current stars come together for a match celebrating the 200th anniversary of Marylebone Cricket Club’s move to its current headquarters ground of Lord’s in north-west London in 1814. 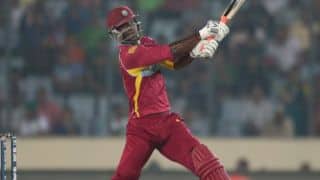