21:30 hrs: S Sreesanth and 17 others released from Tihar Jail

S Sreesanth and other accused have been released from Tihar jail after the Saket court in Delhi granted them bail on Monday.

“I am very happy. I should thank my lawyer. It was a testing phase for me, the last 27 days. I believe in the Indian judiciary and I am sure my innocence will be proved,” Sreesanth was quoted as saying by NDTV minutes after coming out.

“I played the game in the right spirit. I’ll abide by the process of law,” he said.

S Sreesanth and Ankeet Chavan spent almost 26 days in jail after being arrested by the Delhi Police for their involvement in spot-fixing during Indian Premier League 2013.

20.30 hrs: Tamil Nadu Police on Monday arrested city hotelier Vikram Aggarwal after questioning him for around seven hours in connection with betting during the Indian Premier League 2013 cricket matches.

19:50 hrs: The Saket Court in Delhi has granted bail to cricketer S Sreesanth and 17 others accused in spot-fixing during Indian Premier League (IPL). Some of the accused included Sreesanth’s friend Jiju Janardhanan, bookie Chandresh Patel and cricketer Ankeet Chavan. However, the third cricketer accused in the spot-fixing scandal Ajit Chandila remains in jail as he had not applied for it, reports CNN-IBN.

The hearing which began at 12:30 in the afternoon went on for almost seven hours and eventually went in favour of the accused. The court said that there is no prima facie evidence for the accused to be tried under Maharashtra Control of Organised Crime Act (MCOCA).

17:30 hrs: Raj Kundra has expressed his disappointment over BCCI’s decision to suspend him pending inquiry on allegations of betting. Following is an excerpt from the official statement issued by Raj Kundra:
“All sorts of accusations were made against me without proof, by people in powerful positions. It is sad that without accurate facts, I am being made a scape goat and put under trial by the media based on unproved claims.”


Defending himself on betting allegations Kundra said, “People need to realise that as a British national and NRI, If I wanted to bet I could have done so off-shore on ANY betting website legally. However I did not do so as the IPL contract as per ACSU rules clearly states that owners cannot bet on the IPL.”

Kundra also said that he had constantly requested BCCI to include team owners in the IPL governing board as the owners are the one who invest a lot of money in the tournament and they should have a say in its functioning.

13:30 hrs: Ravi Sawant, President of Mumbai Cricket Association has been appointed as Treasurer of the Board of Control for Cricket in India (BCCI). According to PTI, the decision was taken at the Working Committee meeting held on Monday.

12.45 hrs: The latest news coming in that the Board of Control for Cricket in India (BCCI) have suspended Rajasthan Royals co-owner Raj Kundra till the end of the probe by BCCI. Kundra had earlier admitted to the Delhi Police that he was involved in betting during Indian Premier League (IPL).

Kundra’s lawyer Majeed Memon lashed out and said to media, “It appears to be a rash decision, done without showcause notice. BCCI should have asked Kundra before taking any action.” Memon referred to Delhi Police Commissioner’s statement that there is no evidence to take action against Raj Kundra.

Memon said that he will wait for a formal suspension letter from BCCI and then challenge the decision.

11.35 hrs: The Board of Control for Cricket in India (BCCI) have started their emergency meeting as the ongoing spot-fixing and betting saga refuses to die down.

Rajasthan Royals’ co-owner Raj Kundra will be the focus of their discussion and they could decide on the fate of Kundra as well as the Rajasthan Royals franchisee. Kundra was questioned by Delhi Police for betting during Indian Premier League (IPL).

11.15 hrs: Chennai-based hotelier Vikram Aggarwal appeared before the Crime Branch-CID of the Tamil Nadu Police after summons were issued to him in connection with the Indian Premier League (IPL) betting case, police said.

18:50 hrs: Rajasthan Royals co-owner Raj Kundra on Saturday wished his Bollywood actress wife Shilpa Shetty a happy birthday and apologised for the disturbing developments in the past few days that saw the two being dragged into the IPL spot-fixing scandal.

Wishing my gorgeous wife @theshilpashetty a very happy birthday apologies for all this nonsense u have had to deal with. Truth is coming out

18:42 hrs: Shahrukh Khan stated that team owners finding loopholes in the system and misusing it is undignified. “If you’re an owner, you’re aware of all the rules and the loopholes and it’s undignified to misuse them,” Shahrukh was quoted as saying by Hindustan Times. His statement comes in the midst of Rajasthan Royals co-owner Raj Kundra’s confession to betting in IPL.

As a proud person and a sports lover, I think if you are on the game, apni film ki ticket black nahin karna chaiye. Hum toh nahi bechenge, kisi aur ko karna hai toh karne de (we should not sell our own movie tickets in black. We won’t sell it, but If somebody else does it, then it is their lookout).

18.12 hrs: Rajasthan Royals have stated that if co-owner Raj Kundra is proven guilty, then he will be suspended and he will also forfeit his shares. Kundra holds 11.7 per cent of the shares. Rajasthan Royals have also said that he has no involvement in the running of the franchisee. 17.30 hrs: S Sreesanth’s bail plea hearing has been adjourned till Monday, June 10, 2013, reports CNN IBN. The Maharashtra Control of Organised Crime Act (MCOCA) court was to hear his fresh bail application today (Friday).

15.00 hrs: Delhi Police Chief Neeraj Kumar has said that they have shared all information related to the Indian Premier League spot-fixing and betting controversy with the BCCI, reports Times Now. He said they have solid evidence of underworld links to fixing.

Kumar also said that Rajasthan Royals co-owner Raj Kundra is not their main focus and he will not be given any special treatment. He added that they are yet to decide on what to do with Kundra’s actress-wife Shilpa Shetty.

11.00 hrs: A Delhi court on Friday will hear a fresh bail application moved by S Sreesanth, reports NDTV. His lawyer moved for fresh bail after the Delhi police invoked Maharashtra Control of Organised Crime Act (MCOCA) against the cricketer on Tuesday. Mumbai: Jun 6, 2013

19.00 hrs: The BCCI has announced Sanjay Jagdale’s successor to the honorary secretary’s position in their Working Committee meeting at Kolkata today. The new secretary of the board is Sanjay Patel from the Baroda Cricket Association.

– Vacancy has been caused in secretary and treasurer’s position. The vacancy at the honorary secretary’s position was filled by Sanjay Patel from Baroda Cricket Association.

– After Sanjay Jagdale’s resignation, the three-man commission to probe the scandal was reduced to two. Let there be a two-man commission. We have full faith in the two retired judges.

– This Raj Kundra issue would be discussed in the Working Committee. The meeting is going to be held on the 10th of June. After we hear all the details, if it demands any strict action, we will look into it. An emergency Working Committee meeting of the board has been called. It will be held in Delhi on June 10.

– An interim report has been submitted to BCCI in Mumbai. This is Ravi Sawani’s (BCCI’s anti-corruption unit head) report. Once the information is received from the Delhi and Mumbai Police, we will share with you.

18.00 hrs: Rajasthan Royals co-owner Raj Kundra has been placing bets in the IPL for the last three years, sources in the Delhi Police told Times Now. The TV channel’s sources revealed that Kundra placed bets of Rs 60 lakh last year and Rs 15 lakh this year. Earlier, Kundra had confessed to betting in matches that featured teams other than the Royals.

17.35 hrs: Actor Vindoo Dara Singh, who was released on bail yesterday, claimed innocence in the IPL spot-fixing and betting case. He said that the police have no evidence to link him with the betting scam. He also asked the authorities to arrest the bookies, and not punters.

Asked about Rajasthan Royals owner Raj Kundra, whose passport was seized after close to 12 hours of questioning by the Delhi Police, Dara Singh said, “Raj Kundra is a friend. He is a good human being. I know him very well. Whenever his team plays, he never says that his team will win. Crores of people bet in India. If you have to stop betting in India then catch the bookies, not the people who bet,” he said.

16.45 hrs: Sources in the Delh Police on Thursday said that they are unlikely to arrest Rajasthan Royals co-owner Raj Kundra, who admitted to have been involved in Indian Premier League (IPL) betting, if they fail to establish a spot-fixing link.

According to CricketNext, the Delhi Police Special CP, SN Srivastav said, “We are not arresting him as we don’t have enough evidence yet.” However, the police are keeping the option of charging Kundra under the Gambling Act open.

Lalit Modi, who is hyperactive on his blog when attacking N Srinivasan and forces opposed to him, has gone absolutely mum now that the heat is on Rajasthan Royals. An income tax department report on Modi had revealed that he holds a silent stake in three IPL teams — the Rajasthan Royals, Mumbai Indians and Kings XI Punjab. 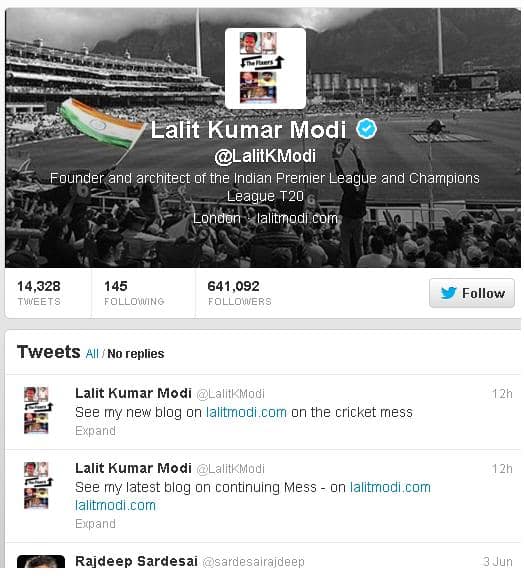 13.27 hrs: Delhi Police Chief Neeraj Kumar says Rajasthan Royals owner Raj Kundra was involved in betting and that is why they called him for questioning. “He admitted to betting, especially on his own team. He also said he has lost a lot of money during the betting,” said Kumar to the media.

Kumar also said that Umesh Goenka is a bookie and that Kundra placed his bets through him. He added saying that Rajasthan Royals player Siddharth Trivedi only gave information into the controversy.

12:50 hrs: Shilpa Shetty, has defended her husband Raj Knunda, who is the co-owner of Rajasthan Royals. She said that they haven’t done anything wrong. Times Now also reported her saying that she said that they will co-operate with the police and that Umesh Goenka has misused her husband’s name. 12:15 hrs: Times Now has reported that Gurunath Meiyappan appeared before the Mumbai Crime Branch today. He was granted bail two days ago and by the conditions laid he has to report to the Crime Branch twice a week. 12:00 hrs: Reports have emerged which suggest that Raj Kundra, the co-owner of the Rajasthan Royals has admitted to betting in the Indian Premier League for the past two to three years, NDTV reported. Earlier, he was interrogated by Delhi Police and his passport has been impounded.

Times Now, however, had a conflicting story. They claimed that Kundra had said in his defence that if he was involved he would have made money if he was fixing.