The Pakistan Super League (PSL), estimated to be in excess of $100 million, will see five city-based franchises in the fray

The Pakistan Super League (PSL), estimated to be in excess of $100 million, will see five city-based franchises in the fray. Players from across the globe will be seen participating in the cricketing extravaganza for the franchises named as Islamabad United, Karachi Kings, Peshawar Zalmi, Quetta Gladiators, Lahore Qalandars. The draft for the much talked about league has to be one of the most imporant events prior to it as the teams will be decided accordingly. Many players have already expressed their excitement regarding the league and it surely is going to be one of the most entertaining contests the game of cricket has ever seen.

Dwayne Bravo goes to Lahore! Congratulations !
Shakib Al Hasan, the top ranked all-rounder currently, goes to Karachi Kings! Cheers!
Peshawar will not pick any players in round 2 but two in the third.
Experienced Misbah Ul Haq goes to Islamabad United. He will be seen captaining the side as well. Congratulations!
Umar Akmal gets picked by Lahore! Cheers!

*Peshawar, Islamabad, Quetta and Lahore have already picked their 3 Platinum players while Karachi is yet to pick their third*

With that, all the teams complete picking their Platinum and Diamond players.

Muhammad Aamir, one of the most awaited names, gets picked by Karachi Kings! Cheers Karachi!

Congratulations! Umar Gul has just been picked by Quetta Gladiators!

Mohammad Sami is the eighth pick and Islamabad United are the ones who got him!

Junaid Khan has been picked by Peshawar Zalmi. Cheers!

The PSL draft is a long process and includes the selection of 20 players for each of the teams. The draft goes in a circulatory process as Islamabad United, Karachi Kings, Peshawar Zalmi, Quetta Gladiators, Lahore Qalandars each get to pick a player in each round. The teams are supposed to pick 3 Platinum, 3 Diamond followed by 3 Gold and 5 Silver players for their team.

The Teams will also pick 2 emerging players each from the domestic circuit while four Supplementary players to complete their twenty players’ quota. The captains of the respective teams are also to be announced during the event. 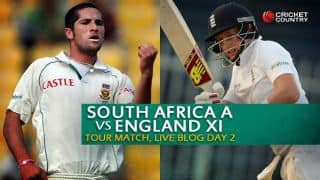 SA A 35/2 | Live Cricket Score, South Africa A vs England XI, Tour Game at Pietermaritzburg, Day 2: Stumps with SA A in precarious position

Video: Darren Sammy thanks fans for their birthday wishes