Bangladesh are struggling in the shortest format after a disappointing ODI series against New Zealand.

In the first T20I of the three-match series between New Zealand and Bangladesh, pacer Lockie Ferguson opened his account in style by grabbing two scalps of his first two balls. Bangladesh opted to bat in the series opener. They got off to a precarious start but it was Ferguson’s twin blows which dented their innings further. Kane Williamson introduced Ferguson in the 6th over. The move paid rich dividends as the Ferguson removed Sabbir Rahman and Soumya Sarkar with the first two balls of his T20I career. Though Mahmudullah saved the hat-trick, Ferguson joined an elite list of bowlers with first-ball-wicket in T20Is.

Surprisingly, Kohli features in this list as well (apart from entering various illustrious batting lists recently). He took the wicket of England’s Kevin Pietersen on his very first ball. The first ball was adjudged a wide but India s poster boy got rewarded in the very next delivery to send Pietersen packing.

Ferguson made his debut along with Tom Bruce and Ben Wheeler in the ongoing clash and has started off on a positive note. Interestingly, he also made a memorable debut in 50-over format where he dismissed David Warner with the sixth ball of his career, in the recently-concluded Chappell-Hadlee Trophy in December 2016. Year-ender: Cricket moments from 2016 fans should not forget, but probably will 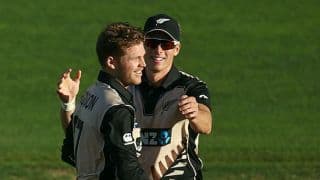