On the other hand, a senior BCCI functionary questioned the logic behind laying astro-turf or a synthetic tennis court.

New Delhi: If the Board of Control for Cricket in India (BCCI) decides to follow the recommendations on reforms suggested by the Justice RM Lodha committee, one could soon find stadiums in Pune, Nagpur, and Rajkot hosting Indian hockey team’s ‘Test’ matches or tennis team’s Davis Cup games. The Lodha panel, in its report, has recommended that the cricket stadiums should be made accessible to other sports like tennis and hockey, which they feel will generate revenue for the state associations. In fact the four relegated units from Maharashtra and Gujarat will also fall in that purview — a recommendation which many feel is not feasible for all practical purposes. ALSO READ: Lodha Committee recommend separate governing bodies for IPL and BCCI

The above mentioned recommendation is on Page 78 of the Final Report (Volume 1) in Chapter under the header of ‘Constitution and functioning of Members’. The Committee recommends: “To make the existing stadia amenable to other sports by providing for alternate surfaces to be laid (Astroturf for hockey, Carpet for tennis, etc) so that income may be generated and there would be all round development of sport, care being taken not to damage the pitch. But they should not be used for public functions where thousands will stomp on the ground.” ALSO READ: Mumbai Cricket Association concerned with recommendations of Lodha Committee

The above recommendation relating to State Associations (Full Members) will also be applicable to the four associations relegated to the category of Associate Members and who are entitled to disbursement of the grant from the BCCI.

A senior BCCI functionary questioned the logic behind laying astro-turf or a synthetic tennis court where there would be around 12 centre strips that are prepared for matches. “On one hand, they are saying that you cannot damage the pitch and then you want to lay an astro turf! Also you need to think practically, the distance of the crowd from the action. ALSO READ: Lodha Committee report submitted in Supreme Court

A hockey stadium has normally four galleries and it is close to action. How can you lay an astro-turf over grass and have people watch from 80 metres,” the BCCI official told PTI today.

When he was reminded that at the Brabourne Stadium in the year 2006, India played a Davis Cup tie against Pakistan, the official said: “That was the last time, tennis was played in a cricket stadium. What is the distance of spectators from real action at Wimbledon or Flushing Meadows. If you have to generate revenue, you cannot do it by organising junior hockey or tennis tournaments. So one needs to look at the practicality of such a recommendation,” he added. 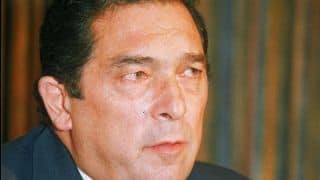