After England‘s cricketers were left battered and bruised during a dismal ICC Cricket World Cup 2015 campaign, another symbol of the English game took a beating on Monday when the famous Father Time weather vane at Lord’s was buffeted by high winds.

The vane, situated above the Lord’s Mound Stand clock, features a steel figure of an elderly man with a scythe on his back putting a bail on some stumps, and is synonymous with cricket in England.

But like the country’s national team, who tamely bowed out of the World Cup at the group stages, Father Time encountered some unexpectedly fierce turbulence and was left flat on his back by gales in north London over the weekend.

The discovery of the fallen Father Time sparked concern among staff from Marylebone Cricket Club, which owns Lord’s. But Father Time, who has stood at Lord’s since being donated by architect Sir Herbert Baker in 1926, has previously fallen foul of bad weather more than once.

He was struck by lightning in 1992 and, worse, knocked completely off his perch when hit by a barrage balloon during the Blitz in World War II – before spending the rest of the War in a cellar. But he has, as his name indicates, moved with the times and tweets these days on behalf of Lord’s Cricket Ground, including a series of messages on his latest mishap.

“NEWS: I’ve was felled by high winds last night! Ouch!,” the tweets began. “Apologies for my poor grammar in the previous tweet – but I’m not feeling my best after being damaged last night! “FATHER TIME LATEST: I’ve been diagnosed with copper damage and will be undergoing treatment ASAP.” 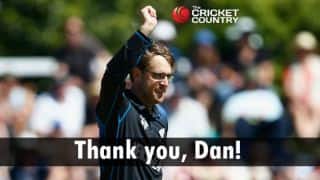