Kolkata (IANS) Eden Gardens will have a bell similar to the Lords ground ahead of the India-New Zealand second Test starting on Septeber 30, Cricket Association of Bengal officials said on Monday. Previously, Sourav Ganguly had stated that every morning it will be rung by a cricketer from either side or ex-players. The one at Lord’s is located outside the Bowlers’ Bar of the pavilion and is rung to signify the imminent start of play. Shedding more light on it, CAB ground committee chairman Debabrata Das said: “The bell has been brought from Chandigarh. It is made of brass. There will be silver coating done on top it and will be in place by 25th or 26th of this month.”

“The bell will be installed soon,” CAB president Sourabh Ganguly told media persons after a working committee meeting of the association.

Also, celebrating India‘s fascinating journey in the longest format of the game, the Cricket Association of Bengal (CAB) will organise a photo exhibition ahead of the upcoming Test match here against New Zealand encapsulating some of the famous moments of the 500 Tests that the country has featured in. “There will be photos of India’s 500 Tests. A small show will be organised during lunch break on the first day,” CAB president and former Indian captain Sourav Ganguly said on Friday after a meeting where roles of the association officials for the game beginning on September 30 was decided upon. Eden Gardens will host the series’ second Test and the 501st overall played by India over the past 84 years. The honour of organising the 500th Test has gone to Green Park, Kanpur, where the two teams would clash from September 22.

The BCCI has decided to invite all the former India captains to celebrate the occasion of country’s ’500th Test match’ that will be played against New Zealand in Kanpur from September 22. A specially minted silver coin with 500th Test embossed on it is being prepared for the toss. Senior BCCI official and UPCA supremo Rajeev Shukla said that a host of events are being organised by the BCCI to make the event memorable. Sourav Ganguly, Jagmohan Dalmiya to have stands named after them at Eden Gardens? 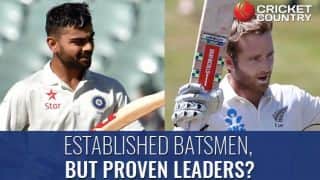