Middle-order batsman Virat Kohli on Friday said that star India batsman Sachin Tendulkar is being put under immense pressure of scoring his historic 100th ton, but the Little Master can handle it successfully. 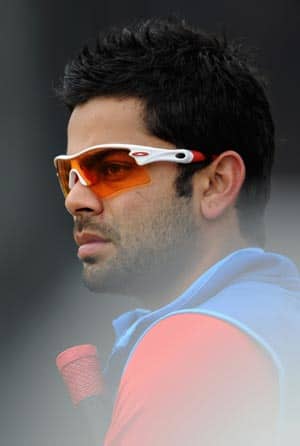 Middle-order batsman Virat Kohli on Friday said that star India batsman Sachin Tendulkar is being put under immense pressure of scoring his historic 100th ton, but the Little Master can handle it successfully.

Kohli told reporters after the end of the fourth day s play, “I think a lot of people have started putting unnecessary pressure [on him]. He has achieved so much. Like MS said, the milestone is going to happen; people are making such a fuss about it. I was still batting when he came back but he was pretty relaxed after that. It has happened to him a lot of times. Obviously he would be disappointed, but he is not one to be disappointed for too long and was pretty relaxed.”

Kohli said that it is a great pleasure to share the dressing room with the likes of Tendulkar, Rahul Dravid VVS Laxman and many more.

“It s a privilege to be part of the same dressing room. I never thought I would even get to meet these people face to face; now I m sharing the dressing room with them. It has been wonderful; you learn so many things from them, especially in practice sessions. And everyone has their own way of preparing before the match or on match days,” he said.

The right-handed Delhi batsman scored a fine 52, and was bit disappointed after missing out on maiden Test century.

“The way I was going, the way the situation was, I am not saying that I am guaranteeing I could get a hundred, but it was a perfect scenario for me to get a big score. I wanted to go with the turn, but did not get too much elevation; I middled the ball but it went it straight to the fielder. It was one of those days. Cricket is a game like that; if it had gone over the fielder, everyone would have been, ‘He went against the turn and got a six . If it does not get executed, they say, ‘He could have waited ,” Kohli said.

Man claiming to be 'Harvinder Singh' calls Ashwin and abuses him!