Luke Ronchi represented Australia briefly in 2008 and 2009 before resurrecting his international career with New Zealand in 2013.

Wicketkeeper Luke Ronchi has retired from all international cricket. The BLACKCAPS gloveman represented Australia briefly in 2008 and 2009 before resurrecting his international career with New Zealand in 2013, playing a total of four Tests, 85 One Day Internationals and 32 T20 internationals. Ronchi plans to continue playing on the domestic T20 circuit around the world and, selection-permitting, for Wellington and will shortly decamp to England, where he will represent Leicester. A popular member of the BLACKCAPS, the 36-year-old played a key role in his side s short-form performance over the past four years, showcased by a magnificent and unbeaten 170 (off just 99 balls) in an ODI against Sri Lanka at Dunedin in 2014-15. Natwest T20 Blast 2017: Luke Ronchi to replace Sharjeel Khan at Leicestershire

He also made a highly successful Test debut against England at Leeds later in 2015, scoring 88 and 31 as the BLACKCAPS posted only their fifth win in 54 attempts on English soil. Known for his signature hitting down the ground, Ronchi averaged 23.67 in ODIs at a strike-rate of 114.50, and 18.89 in T20Is at a strike-rate of 141.33. He says he was privileged to be part of the New Zealand team at a time when it was ranking highly in all three formats.

It was a dream come true, he said of the new lease of life provided by the BLACKCAPS. I can t think of a better time to have been involved with New Zealand cricket. From the 2015 World Cup campaign, through to the overseas tours of that time and some amazing games and series, it s been a genuine highlight for me . Ronchi said he was particularly grateful for the support and encouragement provided by BLACKCAPS coach and selector Mike Hesson and his team, as well as NZC and Cricket Wellington.

It would also be remiss of me to not acknowledge the incredible support provided by my wife Shaan and our children Brody and Indi. Cricket takes you away from home for long periods of time, and my family have been very understanding, he said. Hesson paid tribute to Ronchi yesterday, describing him as the ultimate team man and the epitome of a professional athlete.

We ll remember Luke fondly for the energy he created in the field and his selfless attitude towards the team, said Hesson. He was always prepared to play a role for the greater good of the team; to do what was required even if that risked sacrificing his wicket. Luke was one of the best glovemen going around and I think that s often overlooked in a game increasingly dominated by batting and run-scoring, added Hesson. He was a very skilful wicket-keeper, and a very destructive batsman. We ll miss having him around the group and we wish him well in his future endeavours. 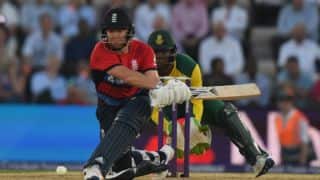