Shaun Marsh got to his fourth Test ton whereas captain Steven Smith followed it with his fifteenth Test hundred.

Steven Smith and Shaun Marsh‘s unbeaten stand of 214 runs have put Australia on commanding position at lunch on Day Three of the third Test versus Sri Lanka. The duo played the first session of the day with aplomb ease as Marsh got to his fourth Test ton whereas captain Smith followed it with his fifteenth Test hundred. Australia are trailing Sri Lanka by 120 runs at the stroke of lunch. They have already lost the three-Test series 2-0 but will like to make amends in the third and final Test. Australia lost David Warner before the close of play on Day Two but have looked strong due to this pair’s resurgence. FULL CRICKET SCORECARD: Sri Lanka vs Australia, 3rd Test at Colombo

Sri Lanka scored 355 in the first innings with tons from Dinesh Chadimal and Dhananjaya de Silva but a counter attacking partnership by Smith and Marsh have ensured the visitors’ fightback. Sri Lanka’s top scorers were Silva, who scored his maiden Test along with Dinesh Chandimal, who eventually top-scored with 132. Full Cricket Updates, Sri Lanka vs Australia, 3rd Test

The duo put on 211 for the sixth wicket after hosts were reduced to 26 for 5. Their partnership had given Sri Lanka some hope in this match but their bowlers have not had it as easy as they did in the first two matches of the series. De Silva, who bowls part-time off-spinners did manage to get the wicket of Warner early, but Sri Lanka have not had any luck against the settled pair of Marsh and Smith. Australia are 235 for 1 at the lunch break. 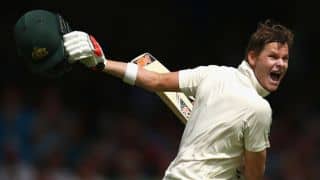