Zimbabwe lost wickets n a hurry towards the end of the first session to put themselves in trouble.

Dilruwan Perera and Suranga Lakmal grabbed two wickets apiece to spark a Zimbabwean batting collapse and move Sri Lanka towards victory on the final day of the first Test at Harare Sports Club on Wednesday. After declaring on their overnight total of 247 for 6 to set Zimbabwe 412 for victory, Sri Lanka looked to have their work cut out for them as Zimbabwe s top three put up resistance in the first two hours of the day. But Perera profited from a dubious umpiring call to trap Tino Mawoyo lbw for 37, and Zimbabwe tumbled from 68 for 1 to 74 for 5 in the space of four overs. The collapse left Sean Williams and Peter Moor at the crease when lunch arrived with Zimbabwe needing to bat out a further 64 overs, or score another 338 runs, to avoid defeat. Full Cricket Scorecard: Zimbabwe vs Sri Lanka 1st Test at Harare

Perera had figures of 2 for 19, while Lakmal had 2 for 17, but it was debutant Lahiru Kumara who made the initial breakthrough of the day. Zimbabwe s openers had seen out the first 16 overs when Kumara was introduced and bowled Brian Chari for 10. Mawoyo put up further resistance in a stand of 37 with Hamilton Masakadza that lasted almost an hour, and was unfortunate to see umpire Simon Fry raise the finger when replays showed Perera s delivery would have comfortably missed leg stump.

Perera trapped Craig Ervine lbw in his next over, and in the following over Lakmal dismissed both Masakadza, for 20, and Malcolm Waller. Sri Lanka need just five more wickets in two sessions to go 1-0 up in the series. 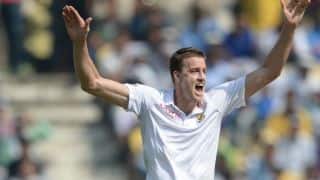