Voting for 288 constituencies in Maharashtra began at 7 am on Monday and will go on till 6 pm.

Indian batting legend Sachin Tendulkar, along with his son Arjun and wife Anjali, cast his vote in Bandra on Monday.

The cricket icon also urged the youth to vote and lauded the senior citizens for their commitment.

“I think we can change our tomorrow and whoever you feel like supporting, whoever you believe in, you should go and vote that is my request to all the youngsters. I think whoever is eligible to vote must come and vote,” said Tendulkar after he cast his vote.

“This morning I was reading a newspaper and I read something which was not so common and that talks about commitment. There were three senior citizens who were mentioned in the article, one senior-citizen was 94-year-old, who was on a wheelchair but he was going to make an effort to come and vote,” continued Tendulkar.

“The other senior-citizen was 100-year-old and he is also going to come and the lady was 106-year-old. So, they are all making an effort to come and vote,” added Tendulkar.

Voting for 288 constituencies in Maharashtra began at 7 am on Monday and will go on till 6 pm.

The Little Master also took to Twitter, posting a picture of himself with wife and son, to highlight the importance of voting, saying: “Happy to have voted & fulfilled my responsibility. Let’s turn out in large numbers to vote & be part of a vibrant democracy. #MaharashtraAssemblyPolls” 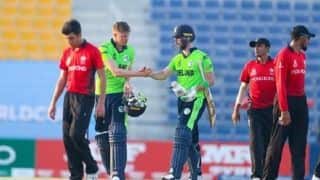