Mahela Jayawardene and Angelo Mathews put up a strong stand for the fifth wicket.

Mahela Jayawardene on Saturday completed his half-century, during the first One-Day International (ODI) between Sri Lanka and Pakistan at Hambantota. Jayawardene faced 57 balls and hit six fours to bring up the fifty.

Mahela Jayawardene and Angelo Mathews put up a strong stand for the fifth wicket to steady Sri Lanka against Pakistan in the first One-Day International (ODI) match at Hambantota. Sri Lanka were 159 for four after 34.1 overs with Jayawardene and Mathews adding 91 runs.

This was after Sri Lanka reached 81 for the loss of four wickets, at the end of 18 overs in the first One-Day International at Hambantota. Mahela Jayawardene was batting on 13, and Angelo Mathews was batting on six.

Mohammad Irfan was bowling well, and generated good bounce from the pitch. He took the wicket of Dinesh Chandimal, as he pulled one straight into the hands of Wahab Riaz.

Upul Tharanga nicked one straight into the hands of Umar Akmal. Kumar Sangakkara was looking in good touch, and dispatched two boundaries in the tenth over bowled by Junaid Khan. But, he too couldn’t convert the start into a big score and fell after scoring 25. Earlier, rain had halted play considerably, reducing the match to 45 overs.

Both teams will look to strike the right team balance ahead of ICC World Cup 2015. 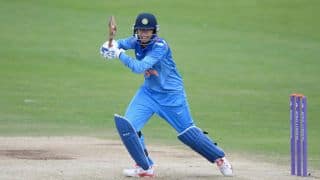