Jayawardene has scored 1,782 runs at an average of nearly 60 in 17 Tests against South Africa.

In the twilight of his glorious Test career, Mahela Jayawardene will sign off with a bagful of memories when he hangs up his boots next month. But there is one team he will cherish playing against the most.

The stylish right-hander has scored against all-comers but his records against South Africa are enviable. His highest Test score of 374 came against the Proteas at home in 2006 — a game that Sri Lanka went on to win by an innings and 153 runs.

In 17 Test matches against South Africa, the 37-year-old batsman has scored 1,782 runs at an average of nearly 60. He has scored the maximum Test runs against England with a tally of 2,212. “I have played against quite a few South African generations. I have played against guys like Polly [Shaun Pollock] and Jacques [Kallis] as well,” Jayawardene said after the second day’s play in the ongoing second Test against South Africa.

“I have fond memories of these encounters.” Jayawardene played another stellar role with the bat against his favourite opponents, making a solid 165 to help Sri Lanka on Friday (July 25) post 421 in their first innings. This was Jayawardene’s 34th Test ton and 11th at the SSC ground, which is the most by any batsman at one venue.

He also joined India’s Sunil Gavaskar and Brian Lara of the West Indies at tied fifth on the list of highest Test century makers, becoming the highest run-getter for Sri Lanka in the process with 11,671 runs.

Jayawardene is due to retire next month after a two-Test series against Pakistan at home, drawing the curtains on an almost two-decade long career.

A stalwart of 147 Tests, he retired from Twenty20 Internationals (T20Is) this April but will still be available for one-day international cricket.

When Jayawardene came in to bat on Thursday (July 24), Sri Lanka were reeling at 16-2, but the former captain anchored the innings during his nearly eight-hour stay at the wicket, hitting 17 fours and a six.

“They [South Africa] are a team that has got a lot of fighting spirit whether it’s home or away. They come hard at you. But it’s always a fair contest. We play hard on the field but we are quite good friends off the field. So I think those are the memories I will cherish the most,” he said. 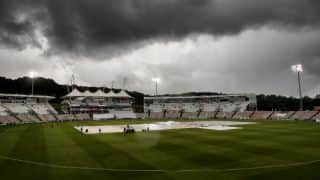