Jayawardene is playing his final Test at Galle.

Mahela Jayawardene walked in field to a Guard of Honour from young players in Sri Lanka with his teammates and spectators welcoming him to a huge applause. This two-Test series is Jaywardene’s final series of his Test career and will be retiring after the Colombo Test on his home ground.

Jayawardene is sixth on the leading run-scorers list and has the second most number of catches by a non wicket-keeper player. Jaywardene, 37, announced his retirement on July 14, 2014.

Jayawardene was satisfied about some of the achievements in his 17-year long career. In a letter to the Sri Lanka Cricket (SLC) chief executive Ashley de Silva, Jayawardene said, “It was not an easy decision to make given that it has been a great privilege and honour representing my country during the past 18 years, but I believe this is the right time”.

Gaurd of honour for @MahelaJay and folkowed by fire works as SL take the field pic.twitter.com/F6Sbhqm0Ee 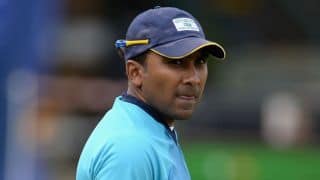