Mahela Jayawardene and Angelo Mathews set the stage for a late assault in the second One-Day International (ODI) between Sri Lanka and South Africa at Pallekele after Tillakaratne Dilshan got Sri Lanka off to a flier.

Earlier, Dilshan was dismissed for 86 against South Africa as Sri Lanka lost their fourth wicket for 154, in the 2nd  One-Day International (ODI) at Pallekele. with Mahela Jayawardene and Angelo Mathews at the crease for the hosts. Dilshan was in imperious form, continuing his love affair with Pallekele where he averages over 90 in ODIs. Imran Tahir had figures of one for 25 in seven overs, as the Lankans found it tough to score freely off him.

After Kumar Sangakkara was dismissed, Sri Lanka went for four overs without scoring a boundary as the focus was on rebuilding rather than scoring quickly. However, they were soon on their way again, as Thirimanne started scoring boundaries to make up for his slow start. However, just as he  started looking good, he holed out to Hashim Amla in the deep off the bowling of Imran Tahir. Mahela Jayawarndane joined Dilshan at the time.

Earlier, Sri Lanka got off to a good start against South Africa. Dale Steyn injured his hand while fielding off his own bowling, going off the field just 2.2 overs into his spell in the process. TM Dilshan made his intentions clear very early on, hitting Dale Steyn down the ground for four in the first over of the match. He followed it up with two more boundaries in his next over. Vernon Philander broke through with the wicket of Kausal Perera in the next over. Kumar Sangakkara suffered a rare failure as well, getting cramped for room while going for a pull shot against Morne Morkel. Lahiru Thirimanne was the new man in for Sri Lanka. Earlier, Sri Lanka had won  the toss and elected to bat first. Both teams were unchanged, as Sri Lanka need a win to stay alive in this series. TM Dilshan averages over 95 in ODIs at Pallekele. 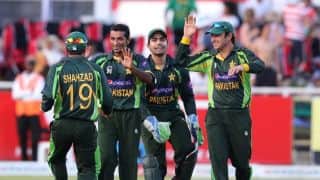