Mahela Jayawardene lit up the stage on Day one of the second Test between Sri Lanka and South Africa at the Sinhalese Sports Club (SSC), Colombo. He hit his 11th Test ton at the venue, 34th overall and has now gotten into his groove as he approaches his farewell in the format. Sri Lanka scored 305 for five on the day.

Sri Lanka won the toss and elected to bat first on a good batting track. But, given the form Dale Steyn is in, he was to always pose a threat. And, in the fifth over, he delivered big blows as Upul Tharanga was done in by a short one and fended the ball to the wicketkeeper. Kumar Sangakkara was dismissed first ball as Steyn surprised him with a short ball and he pulled it to square-leg.

Jayawardene walked out and stamped his authority. He played some great shots through the leg-side and attacked the spinners. Looking at that, Kaushal Silva also found his mark by playing some good shots off the spinners. In tandem, they were taking Sri Lanka to a good position at lunch, but Silva was dismissed for 44.

Angelo Mathews walked out and built a solid partnership with Jayawardene. He got to his fifty, but it was Jayawardene who made waves with his ton. There were typical shots in this innings. He caressed the ball along the ground, found the gaps to perfection. The spinners had almost no chance. Imran Tahir was smashed for 92 runs in his 23 overs. Of course, the batsmen attacked him throughout, but Tahir also didn’t help his case by spraying it around on the odd occasion.

Surprisingly, it was JP Duminy who got the breakthrough at the other end as he had Angelo Mathews dismissed for 63. Thereafter, the scoring rate slowed down as there were new men at the crease and Jayawardene was tiring out and losing steam. Towards the end of the session, he started cramping and Niroshan Dickwella, the debutant took more strike. 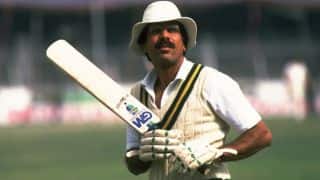 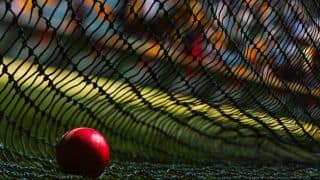