Sri Lanka great Mahela Jayawardene questioned England’s tactics, their ability to handle pressure and the wisdom of home captain Alastair Cook’s pre-match spat with Shane Warne as the tourists moved to the brink of a memorable Test series win at Headingley.

Sri Lanka seized control of the second and final Test on Monday’s fourth day, with paceman Dhammika Prasad taking a Test-best four for 15 as England collapsed to 57 for five in pursuit of a stiff target of 350 for victory. That England had such a tough run-chase was due largely to Sri Lanka captain Angelo Mathews’s Test-best 160.

Sri Lanka gave their hosts an object lesson in how to play at Leeds, with Prasad rewarded for bowling a much fuller-length than his England counterparts. This has been a fractious tour, with Sri Lanka particularly upset by the reporting of One-Day International (ODI) off-spinner Sachithra Senanayake for a suspect action and Mathews unapologetic for the bowler’s ‘Mankad’ run out of Jos Buttler during their 3-2 one-day series-clinching win at Edgbaston.

Jayawardene, whose side have never won a Test series in England comprising more than one match, is regarded as one of cricket’s gentlemen as well as one of its most stylish run-scorers. But the veteran batsman didn’t pull his punches after stumps on Monday. “We know who is on top and who is not,” said the 37-year-old after making a typically elegant 79 in what was probably his last Test innings in England. “We’ve seen that under pressure they’re not quite up to it so we’ll definitely look forward to tomorrow (Tuesday).”

England, perhaps carried away by a pitch with more pace than in the first Test at Lord’s — where Sri Lanka clung on for a draw with just one wicket standing — repeatedly bowled too short.

“Their idea of hurting us and hitting us on the head probably doesn’t work,” said Jayawardene. “If you’re getting that good length up front, getting the ball to do a bit and being patient, one way or another people will nick it.”

Prior to this match Cook, said “something needs to be done” about the barrage of criticism he has received regarding his captaincy from Australia great Warne. “I definitely feel for him but it doesn’t help when you have arguments with commentators and past cricketers,” Jayawardene said of Cook, who led England during their 5-0 Ashes thrashing in Australia. Mathews was aided hugely in an eighth-wicket partnership of 149 by Rangana Herath, who made a fine 48. There were times when England seemed more concerned with getting Herath on strike than dismissing Mathews.

But England batsman Ian Bell, playing in his 100th Test, defended Cook’s tactics while praising Mathews. “He’s played arguably one of the best knocks we’ve seen against us, certainly shepherding the tail,” Bell said of the all-rounder’s hundred. “But you look back with hindsight, I think if you want to stop someone like that scoring runs you get them out — don’t you? You don’t (just) try to stop them scoring. I don’t think the tactics were wrong, most teams would do that in the same situation,” said Bell.

“I don’t think Cookie could have done anything different.” He added: “It looks like we’re going to lose the Test series. If this was a five-match series, we could fight our way back in — but we can’t. Bell would be the man most likely to succeed Cook as England captain should the struggling opener quit his post. However, Bell said he expected Cook to lead England into their forthcoming five-Test series at home to India. “Absolutely, absolutely, no doubt.” 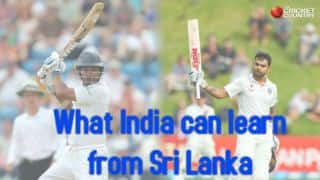