Barnes helmet is a combination of a helmet and a mask, which covers his forehead and crown.

Warren Barnes came into limelight after the New Zealand bowler used a helmet while bowling in a domestic match. Barnes’ headgear is a combination of a helmet and a mask, which covers his forehead and crown. It was only a day before yesterday that Andrew Ellis was hit on the head in his follow-through in a 50-overs game.

According to observerbd.com, Barnes said that helmet should be made compulsory for bowlers. He predicted that soon laws would come in to safe bowlers as well.

He said: “The face mask was originally there to stop me from getting hit, as my follow through kept my eyes off the ball more than other bowlers. But as we have seen in a few cases around the world any bowler has the chance to get hit”.

He adds, “I do hope more and more bowlers look into some sort of face protection especially around the T20 game. As batters are hitting the ball harder and harder every year, it only makes sense to protect the bowlers, as in most cases they are the closest person the the batter when it gets hit”.

“The game is already made some big changes around protecting batters and even umpires from getting hit in certain places, so I think it’s just a matter of time before we see laws brought in to protect bowlers”, Barnes concluded. 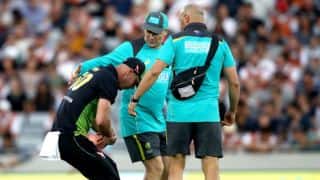