Shaun Marsh came into bat at No 3 position.

After Kings XI Punjab lost the wicket of Virender Sehwag in their game against Rajasthan Royals in Indian Premier League (IPL) 2014, Manan Vohra, the young and promising top-order batsman took over by collecting runs. He was particularly severe on captain, Shane Watson’s bowling. Vohra flicked him for six over mid wicket for a six and followed it up with another boundary. Shaun Marsh, the left-hander joined the fun with a classy off drive. 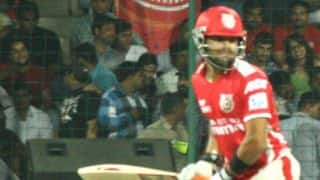