Get all the weather updates from Machester, Old Trafford where England will host West Indies for the second Test.

England will look to bounce back at Old Trafford, Manchester after a shock defeat at Lords by four wickets. What will bolster England’s batting would be the return of regular skipper Joe Root. There could be a couple of more changes as England would look to win and level the series 1-1. West Indies, on the other hand, will look to maintain the momentum they earned at Lords. It is set to be a cracker at Old Trafford, starting Thursday.

It would come as a good piece of news for fans as no rain is expected, but it would be overcast at Old Trafford. The humidity would be on the higher side. 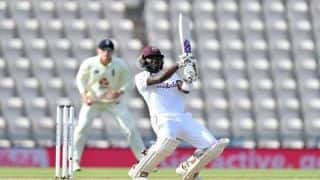