Kings XI Punjab failed to capitalise on the rollicking start by openers Mandeep Singh (56) and Shaun Marsh (32) as they were restricted to 156 for eight by Chennai Super Kings in their Indian Premier League match, in the south Indian city on Saturday. 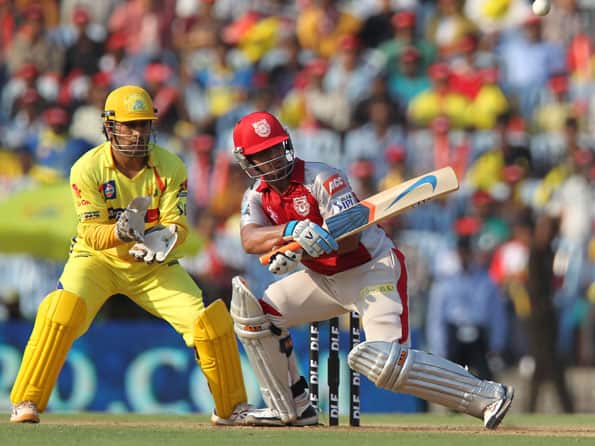 Kings XI Punjab failed to capitalise on the rollicking start by openers Mandeep Singh (56) and Shaun Marsh (32) as they were restricted to 156 for eight by Chennai Super Kings in their Indian Premier League match, in the south Indian city on Saturday.

Kings XI batsmen committed harakiri as they lost five wickets for just 27 runs at the end. From 127 for three in 15.5 overs, visitors’ batting collapsed.

Opting to bat, Mandeep scored a composed 50-ball 56, laced with five fours and a six, while Marsh played a fine 22-ball 32 knock, hitting four fours and a six.

Promoting Marsh to the opening slot paid rich dividends as he along with Mandeep shared a valuable 68-run partnership for the first wicket in 8.1 overs.

Both the openers hammered boundaries all over the park, adding 43 runs in the first six overs of mandatory powerplay.

The pair looked comfortable against the pace duo of Nuwan Kulasekara and Albie Morkel and that prompted Chennai skipper Mahendra Singh Dhoni to introduce off-spinner R Ashwin in just third over of the innings. And Ashwin in turn gave away just five runs.

But Mandeep, who scored his maiden fifty Saturday, had other ideas as he hit the offie for a six and a four in his very next over.

Dhoni brought in left-arm spinner Shadab Jakati into the attack, who found a place in the team ahead of medium-pacer Yo Mahesh. Part-timer Suresh Raina was too introduced into the attack as Dhoni searched for the first breakthrough.

KXIP stole 17 runs off Jakati’s over with Marsh hitting a six and two fours in three consecutive balls to take the team to 68 for no loss in eight overs.

But just when it seemed that the match was running away from Chennai, Marsh got unlucky to get run out.

Mandeep drove the ball hard and straight back at Ashwin, who bent down to get his hands on the ball, instead it got deflected off his boot and hit the stumps. Marsh tried getting back but fell short of his crease.

Former Pakistan all-rounder Azhar Mahmood joined Mandeep in the middle and smashed Ravindra Jadeja for two huge sixes before getting out for 12-ball 18. It was West Indian Dwayne Bravo who removed Mahmood in the 12th over.

David Miller then continued for a while with Mandeep before Albie Morkel sent him back and that triggered the collapse.

Morkel wreaked havoc as he returned both captain David Hussey (7) and Piyush Chawla (0) in quick succession, with Bipul Shrama getting run out. (PTI)