Madeep Singh hit a match-winning 45 not out off 18 balls.

Mandeep Singh, Chris Gayle, and Virat Kohli powered Royal Challengers Bangalore (RCB) to a seven-wicket win over Kolkata Knight Riders (KKR) in Match 33 of Indian Premier League (IPL) 2015 at the M Chinnaswamy Stadium, Bangalore, on Saturday. Madeep hit a match-winning 45 not out off 18 balls to lead RCB to a last-over finish. With this win, RCB stay in the top-half of the points table, as do KKR. Scorecard: Royal Challengers Bangalore vs Kolkata Knight Riders, Match 33 IPL 2015

Kohli and Gayle opened for RCB, scoring 48 in less than four overs to get RCB off to a flier. Gayle thrashed 21 off nine balls, but holed out after hitting Brad Hogg for two sixes in the over. Gayle hit three sixes in his innings to ensure that RCB were up and running. However, AB de Villiers suffered a rare failure, playing on off Piyush Chawla for only two as RCB were then reduced to 51 for two. Updates: Royal Challengers Bangalore vs Kolkata Knight Riders, Match 33 IPL 2015

Kohli played a fine innings at the other end, but holed out to Suryakumar Yadav off Andre Russell for a 20-ball 34 with RCB needing 31 more in less than three overs. No. 4 batsman Mandeep Singh took charge of playing the big hits, as David Wiese came in at No. 5. Mandeep showed tremendous hand-eye coordination and played some big hits. He hit two curial boundaries in the penultimate over to take the equation down to 12 off the final over. He saved his best for the end though, hitting Russell for two sixes in the final over to win the game for RCB by seven wickets. IPL 2015 Highest run-scorer: List of best batsmen in IPL 8

Earlier, Russell’s blitz powered KKR to an excellent 111. Kohli won the toss and decided that RCB would bowl first in the rain-shortened game, as neither team made any changes to their respective sides. IPL 2015 Highest wicket-taker: List of best bowlers in IPL 8

With the game being just 10 overs per side, KKR made a few changes to their batting order. Robin Uthappa and Gautam Gambhir opened for KKR, and put on 33 in just under four overs before Gambhir was brilliantly caught by Mandeep Singh of David Wiese. Gambhir’s 12 had come off eight balls with two boundaries. IPL 2015 Most 6s and 4s: List of most dangerous batsmen in IPL 8

That brought in Russell at No. 3, a move which proved to be a masterstroke. Uthappa went from looking to score boundaries off every ball to turning the strike over and letting Russell go after the bowling. Uthappa was finally dismissed looking to slog Yuzvendra Chahal. The ball only went up in the air, and Dinesh Karthik took a tricky catch. Uthappa had scored a 21-ball 23 which included three boundaries. IPL 2015 Leading fielders: List of Best fielders in IPL 8

That brought in Ryan ten Doeschate at No. 4, and he too continued what Uthappa was doing by giving Russell the strike. Russell was at his brutal best, taking the attack to the RCB bowlers. However, he was dismissed in the penultimate over of the innings, brilliantly run out by Karthik. IPL 2015 schedule: IPL 8 match time table with venue details

That did not deter new man Yusuf Pathan, who hit a six off his second delivery. Mitchell Starc bowled a super final over though, getting ten Doeschate out for 12 and conceding a mere nine runs, as RCB were left with a target of 112. Indian Premier League (IPL) 2015: Complete coverage 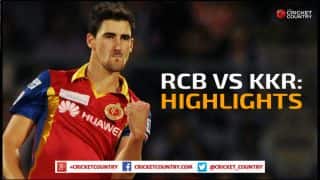