Karnataka overhauled the target of 184 with 22.3 overs to spare

Manish Pandey and Karun Nair struck unbeaten half centuries as Karnataka cantered to an easy seven-wicket victory over Goa in a South Zone leg of the Vizay Hazare Trophy here today. Pandey (69 not out) and Nair (78 not out) stitched 142 runs for the unbroken fourth-wicket stand as Karnataka overhauled the target of 184 with 22.3 overs to spare at the NSC Ground here.

Pandey’s unbeaten 69 came from 58 deliveries and included 10 hits to the boundary while Nair struck 11 fours and a six in his 65-ball knock of 78 not out. Chasing a small target, Karnataka were though in trouble as they were reduced to 43 for three in the eighth over before Pandey and Nair steered their side to 185 for three in 27.3 overs.

Earlier, Goa produced a disappointing batting show as they were all out for 183 in 40.2 after electing to bat. Darshan Misal was the only significant contributor with a 50-ball 51 while Keenan and Robin D Souza made 27 each. For Karnataka, Vinay Kumar, Udit Patel and Karun Nair grabbed two wickets apiece while Abhimanyu Mithun, H S Sharath and Shreyas Gopal took a wicket each. 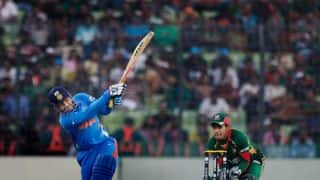