Currently, KKR are 87 for the loss of three wickets in nine overs with Yusuf Pathan on 26.

Kolkata knight Riders (KKR) batsman, Manish Pandey was dismissed for 21 by fast-bowler, Dhawal Kulkarni, after being caught by Chris Morris at cover, during their chase against former champion, Rajasthan Royals (RR) in Match 54 of the 2015 Indian Premier League (IPL) at the Brabourne Stadium in Mumbai on Saturday. Currently, KKR are 87 for the loss of three wickets in nine overs with Yusuf Pathan on 26 and Andre Russell on 10. LIVE Updates: Rajasthan Royals vs Kolkata Knight Riders 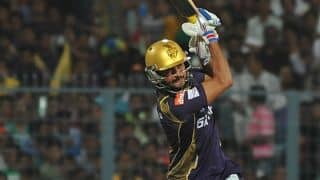 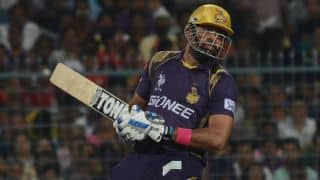