He received an injury on his chin as his helmet jammed against his face during the collision.

Manish Pandey, the Karnataka batsman and the No. 3 for India A, suffered an injury on his chin after colliding with wicketkeeper Matthew Wade in the fourth match of the triangular series against Australia A in Chennai. He had struck a confident four via a cracking cover drive off James Pattinson the first ball he faced, and was batting on 5 in the eighth over when he flicked Pattinson towards deep fine leg. While the wicketkeeper prepared himself to collect an inaccurate throw from the deep, Pandey ran into his shoulder, the grille of his helmet possibly injuring his chin. LIVE UPDATES: India A vs Australia A, 4th match, Triangular Series, Chennai

India A, however, have had a decent start despite the setback, as Agarwal continued his solidity from the previous game against South Africa A on Sunday. He had scored a match-winning century then to lea his side to an eight-wicket win.

Unmukt Chand, the captain and opener, is the only wicket to have fallen for India A so far. Pattinson got a ball to rise unexpectedly from a length, and at decent pace, he forced an edge from Chand through to the wicketkeeper.

India A are playing their second match in two days, as South Africa A, who were supposed to face Australia A today, have a number of players suffering due to heat and food poisoning. 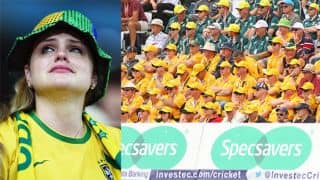