Currently, DD are 96 for the loss four wickets in 14 overs with Yuvraj Singh on 16.

Delhi Daredevils (DD) batsman, Manoj Tiwary was dismissed for a healthy 32 by fast-bowler, Morne Morkel after being caught by Yusuf Pathan at square leg, against defending champions Kolkata Knight Riders (KKR) in match 17 of the Indian Premier League (IPL) 2015 at the Feroz Shah Kotla Stadium in Delhi on Monday. Earlier they lost three wickets in nine over. Currently, DD are 96 for the loss four wickets in 14 overs with Yuvraj Singh on 16 and Angelo Mathews on one. LIVE Scorecard: Delhi Daredevils vs Kolkata Knight Riders 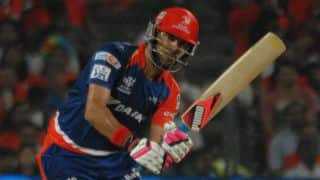