The entire Kolkata might be talking about the two boundaries that Manoj Tiwary hit off Dwayne Bravo's bowling but the 26-year-old feels that his maiden ODI hundred against West Indies at the Chepauk last year was the best moment of his career. 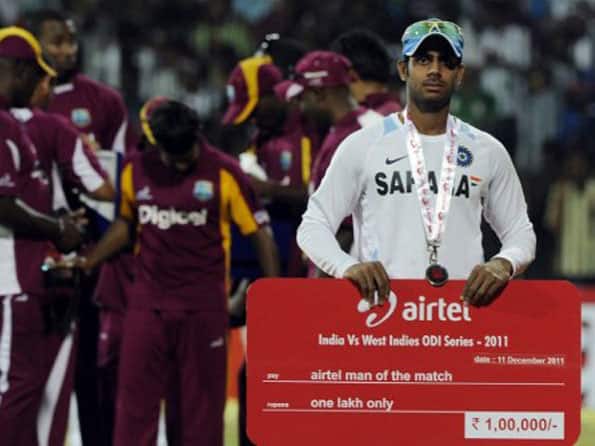 The entire Kolkata might be talking about the two boundaries that Manoj Tiwary hit off Dwayne Bravo’s bowling but the 26-year-old feels that his maiden ODI hundred against West Indies at the Chepauk last year was the best moment of his career.

“I know people will remember those two boundaries but my ODI century against West Indies was the best moment of my career. I played through pain that day and also it was a make or break innings for me,” Tiwary told PTI during an interaction before he boarded the London-bound flight on his way to Caribbean island with India A team.

“I am extremely proud of the two boundaries I hit against CSK but situation entirely different when I played for India. I hadn’t done much in the earlier matches and that could well have been my last chance. I was in acute pain due to cramps. It was an innings that kept me in the mix,” Tiwary said.

The two most cherished cricketing moment in his career happened in Chennai and Tiwary would tell you that he is growing a special connection with the city.

“Eden Gardens will always be my favourite ground but now I have an international century and IPL trophy in Chennai. So Chepauk would certainly be second in my list of favourites. I was very confident that I would win it. I knew Bravo would dig one short and my position and balance was perfect before he bowled. That’s the reason, I started running towards the dug-out once I had hit that shot,” the Bengal captain fondly recollected.

Tiwary has been a regular member on India ‘A’ tours in recent times and he is the first one to admit it.

“Myself and Shikhar Dhawan have now become ‘A’ team veterans,” he said in jest.

“But when you have that India logo on your shirt, you feel that extra motivation. Whether it’s India or India ‘A’, you are representing your country and it’s far bigger than anything else,” Tiwary said.

After scoring his maiden ODI century, he has been benched for 12 consecutive games, but Tiwary doesn’t have any complaints.

“It can happen. earlier, I used to get bogged down by number games like who all are ahead of me and who all are kagging behind me. Now, I know only one thing. I have got a bat in my hand and I would let it do all the talking. I don’t want to think about whether, I am behind anyone in race for a place in the Test team.”

He has got cliched compliments like “Well Played” and “Great Job Done” from a lot of support staff and celebrities but it is the unconditional love of common public that has made him emotional.

“When a common man walks upo me and says that I am the reason for his unbridled joy, you start feeling special. I am a son of the soil and what matters most is love and good wishes from people of Bengal,” Tiwary concluded.