Tiwary has so far played only nine ODIs, hitting a half-century and a century, which came against the West Indies.

Manoj Tiwary, who made his debut for India against Australia at Brisbane in February 2008 in One-Day Internationals (ODIs), turns 29 on Friday. Tiway might have made his debut six years ago, but he has failed to cement his position in the Indian national side.

Tiwary has so far played only nine ODIs, hitting a half-century and a century, which came against the West Indies at Chennai in December 2011. He has also played three T20 Internationals for India, but have not had any success so far.

Tiwary’s career growth has been affected severly by injuries. Back in 2007, when he was all set to make debut in 50-0ver cricket, he ended up injuring his shoulder and had to miss out. Chances did not come too often and Tiwary, despite being drafted in the Indian side several times, such as during India’s horrendous tour of England in 2011, he was called in to replace Rohit Sharma but could not make any mark.

The Bengal batsman was a part of the Indian side in the tour of Bangladesh for a three-match ODI series in June 2014, but he is out of contention again, and nowhere close to selection for the ICC World Cup 2015.

Tiwary has played for the Delhi Daredevils (DD) and the Kolkata Knight Riders (KKR) in the Indian Premier League (IPL). 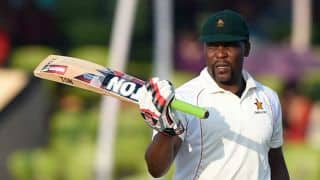 Bangladesh vs Zimbabwe, 3rd Test at Chittagong, Day 3: Zimbabwe 200 for 4 at lunch