Pant also insisted that the atmosphere within the team's dressing room is very friendly where anyone can take advice from any other player.

Young wicketkeeper-batsman Rishabh Pant, who is touted to be the future of Indian cricket, knows he has big shoes to fill as the person whom he will be replacing is none other than legendary captain MS Dhoni.

In an interview with Hindustan Times, Pant spoke about the challenge of replacing Dhoni, both as a batsman and a wicketkeeper.

“I know those are big shoes to fill, but if I start thinking about it there will be a problem. Right now, I am not thinking about what people say. I am just focusing on what I have to do,” he said.

“I just want to do well for my country. That’s the only thing I am focusing on. I take the challenge positively. Now I have to see what I can learn, and what I can do to improve,” he added.

ALSO READ: Rishabh Pant: I loved batting at No 4 during World Cup

The 21-year-old, who has played almost all his ODI matches with Dhoni, said there are many things to learn from the 38-year-old.

BCCI chief selector MSK Prasad, while announcing the squad for the upcoming West Indies tour, made it very clear that Pant is the future wicket-keeper of Indian cricket and will play in all the three formats of the game.

However, while Pant is being readied with an eye on the 2020 World T20, the team management doesn’t wish for Dhoni to hang his boots as that could create a sudden vacuum in the set-up which will be hard to fill if Pant suffers an injury by any chance going into the next showpiece event.

The left-handed batsman also insisted that the atmosphere within the team’s dressing room is very friendly where anyone can take advice from any other player.

“The best thing about this team is that you can talk to anyone and ask them for advice. And if you feel like you have a suggestion, you too can pitch in,” he said.

ALSO READ: MS Dhoni knows when to retire but we have started grooming youngsters: MSK Prasad

“Virat (Kohli) bhaiyya always listens, he never thinks like if he is the captain he shouldn’t listen to a youngster. In fact, it gives players like me great confidence that your captain is listening to you, taking your suggestions, even though you are just a youngster. That is a very big deal for me.

“The other senior players also help me a lot. Young players don’t tend to get overawed in such situations when the senior players help you,” he added.

Pant will be the lone wicketkeeper in the limited-overs leg of the West Indies tour which comprise of three T20Is and three ODIs. However, he will be joined by Wriddhiman Saha for the two-Test series, which are part of the ICC Test Championship. Dream11 Team England U19 vs India U19, Match 4, U-19 Tri-series– Cricket Prediction Tips For Today’s match EN-Y vs IN-Y at Cheltenham 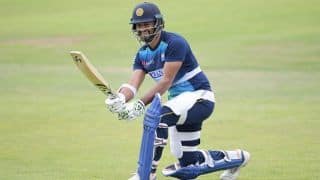