Australia who had reclaimed their No. 1 Test status after their comprehensive victory against New Zealand, lost the coveted title once again to India after series whitewash against Sri Lanka.

Former Australia Test skipper Mark Taylor feels the national side are in rebuilding phase ahead of their three-Test series against South Africa starting on November 3 in Perth. Despite the retirement of key players like Michael Clarke, Brad Haddin, Shane Watson, Chris Rogers and Ryan Harris after the Ashes in 2015, Australia have been decent in the Tests played thereafter. Australia who had reclaimed their No. 1 Test status after their comprehensive victory against New Zealand earlier this year, lost the coveted title once again to India after their series whitewash against Sri Lanka. Australia will be playing the Test series against South Africa as the No. 3 team in Test rankings. FULL CRICKET SCORECARD: Australia vs South Africa, 1st Test at Perth

Speaking to SEN, Taylor said, I think we ve been rebuilding now for about a year. I think we were all worried then how is this side going to bounce back. Well, we bounced back really well. We got back to No.1 (in the Test rankings) by beating New Zealand in New Zealand this February. But I think what we ve seen in the winter is a bit of a reality check that the side is rebuilding. Taylor also emphasised that Australia need to find stability to reclaim the No. 1 spot, It s got some good players and obviously the (David) Warners and the (Steve) Smiths are world-class players, but we re finding some players around them at the moment. Shaun Marsh has been in and out, Joey Burns has come in and out, (Usman) Khawaja s been in and out.

However, Taylor backed the inclusion of Mitchell Marsh and said the output was needed to improve. The 25-year-old averages 24 with the bat out of the 18 Tests he has played and has claimed 27 wickets, If you look at his statistics, they suggest he s stronger in bowling than batting. Really we need him to be a batsman who can average 40 and can take wickets at about 30. Australia will also play day-night Test at Adelaide from November 24-28 and also against Pakistan from December 15-19. However, Taylor feels ICC might need to bring some changes in the longer format, The numbers around the world are dying in some countries that s going to watch the game. Here in Australia and England, things are still going very well. We seem to support the game.

He concluded saying, That s why I think we ve got to have the stuff like the day-night Test matches and even start thinking more seriously about having four-day games of Test cricket because I think it will only add to the appeal of the game and, like all games, make it a bit shorter and a bit faster. That s what people of this generation want to see. 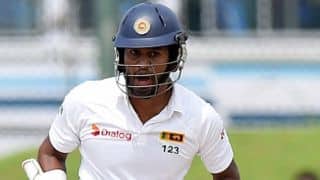